ABOVE: A pair of S class begin their journey westbound on an interstate goods at Ardeer, At this time the new South track was yet to be brougt into service and the train is on the original line, note how the new line slews around Ardeer platform. The new south line was brought into service on Oct. 3 1976. circa 1976. (photo courtesy Chris Wurr)

ABOVE: B 75 on a nicely matched set of wooden cars arrives at Rockbank whilst runing the 1538 down Bacchus Marsh, May 26 1983 Photo courtesy Warren Banfield 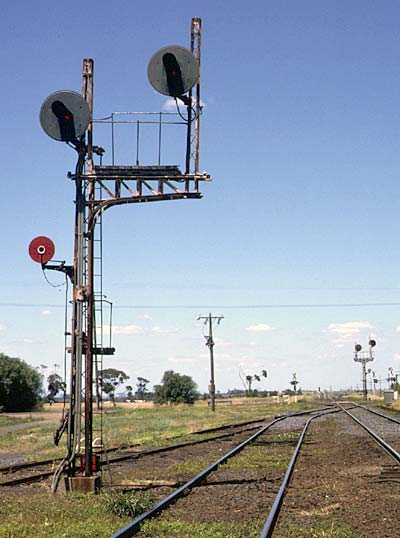 ABOVE: The up home deprture signals were converted to light signals in 1976 when the level crossing, seen in the distance, was equipped with flashing lights. The disc was provided at this time for movements out of #3 road.

ABOVE: A DERM on a down Bacchus Marsh service arrives at Melton. Jan 1983 (Photo courtesy Andrew Hennell)

ABOVE: Melton at its busiest, most of the town are here to see the royal train carrying Charles and Diana pass through BELOW. April 15 1983

ABOVE: An S class on the morning Dimboola to Spencer St. pass. races across the Melton Weir viaduct. Oct. 31 1981.

ABOVE: S 302 leads an up goods around the Parwan curves in 1979. Theses curves were drastically realigned as part of the RFR project.

ABOVE: An up Bacchus Marsh pass sits in No 2 road waiting to cross a down train. Feb. 15 1982 (Photo courtesy Warren Banfield)

ABOVE: The modest station building/signalbox at Parwan as the signalman prepares to exchange the staff with a down train. Jan 1983. (Photo courtesy Andrew Hennell)

ABOVE: The view from the cab of an up goods arriving Parwan for a cross with a down goods. Feb 6 1982.

ABOVE: Parwan "ceased to be" on Feb 4 1984 when it was disestablished as a electric staff station and replaced by Parwan loop, here we see C 508 on an up jet a few weeks after, the removal of the yard tracks is well under way.

ABOVE & BELOW: The Maddingley brown coal mine at Bacchus Marsh generated a considerable amount of traffic for the VR (307,000 tons in 1964) most, if not all, going to the APM paper mill at Fairfield. Here we see B 66 on an up pass passing loaded and empty coal wagons as it arrives at Bacchus Marsh, Aug.1971. (photos courtesy Doug Miles)

ABOVE: An up DRC on a Bacchus Marsh to Melbourne service waits in the platform road as C 505 on a down jet continues its westward journey, Oct 29 1977. (photo courtesy Bob Wilson)

ABOVE: T 320 has pulled its load of Maddingley brown coal into the yard at Bacchus Marsh and awaits departure to Melbourne, circa 1980. (photo courtesy Barry Cooper)

ABOVE: A down Melbourne to Bacchus Marsh service diverges into the platform road at Bacchus Marsh, circa 1980. (photo courtesy Barry Cooper)

ABOVE: A V/Line X and an AN 930 head an Adelaide to Melbourne empty steel train through Bacchus Marsh Dec. 1986

ABOVE: The up Overland powers through Bacchus Marsh, 1986

ABOVE: B 84 gets a Ballarat to Melbourne pass. away from the station stop at Bacchus Marsh. B 84 was withdrawn from service May 1988 and scrapped. March 4 1986

ABOVE: A 66 hauls an empty Steamrail set into Bacchus Marsh, Dec 1986.

ABOVE: In some ways, this photo signifies the end of the VR as we knew it. This was the last royal train run by VR. The two leading S class had run the 3 car train from Spencer Street to Ballarat with Princess Diana and Prince Charles on board. The 3rd S had run ahead of the train as a pilot loco, this photo shows the empty return working near the old site of Rowsley between Bacchus Marsh and Bank Box loop. The 3 S's were repainted for the occasion and if not the last were among the very last loco's ever painted in the classic blue and gold. April 15 1983.The lead loco, S 315, would never look this good again. With little or no attention from when this photo was taken until it was withdrawn in 1988 it was cut up in April 1992.

ABOVE: The longest crossing loop between Sunshine and Warrenheip was Bank Box loop, halfway up Ingliston bank. It was commissioned in 1963, Bacchus Marsh to Ballan was converted from electric staff to Automatic and Track Control as part of the project with the signalman at Bacchus Marsh controlling Bank Box loop. Here we see a very new C 505 on a down jet crossing an S class on an up goods, Oct 29 1977. (photo courtesy Bob Wilson)

Ingliston bank (between Ballan and Bacchus Marsh) had a fearsome reputation with VR enginemen. In reality it was only a 1:50 downgrade, the problem was the speeds allowed down the grade. NSW had worse mainline grades. In the late 80's a ballast train got into trouble down the bank and freight speeds were reduced to where they should have been years before.

ABOVE: An up "jet" with X 53 and a Australian National BL, descends Ingliston bank 1989

BELOW: In the days of Broad gauge to Adelaide and when we ran intrastate goods trains, Ingliston was somewhat of a Victorian railfan mecca. Now all you see are lots of railcars. Here a 3 car V/locity railcar descends Ingliston bank a few kilometres out of Bacchus Marsh. Aug 17 2009

BELOW: 2 R's, on a special train attack Ingliston bank at the same location, 1973

ABOVE: An up"Jet" drops off the staff at Ballan on Oct. 31 1981. The Melbourne to Serviceton mainline was worked under electric staff for almost its entire length. The section from Bacchus Marsh to Ballan however was worked under Automatic and Track Control (ATC) rules, introduced when Bank Box loop was built.

ABOVE: An up Ballarat to Melbourne service has the signal to diverge into the platform at Ballan, circa 1980. (photo courtesy Barry Cooper)

ABOVE: The up Overland has just dropped of the staff from the previous section as it enters the ATC section from Ballan to Bacchus Marsh, circa 1980. (photo courtesy Barry Cooper)

ABOVE & BELOW:The view from a down "jet" as we approach on the mainline with an up Ballarat pass waiting in the loop. Aug 7 1987

ABOVE: X 46 - X 45 lead a Melbourne to Adelaide "Jet" through Gordon in 1978. I had just purchased my first SLR camera, Pentax K1000, and tried this photo in very low light just before sunset on a heavily overcast winters day.

ABOVE: Looking west towards Ballarat

ABOVE: The up, light, home departures looking east towards Melbourne.

ABOVE: Looking west showing the station and the DR (Departmental Residence)

ABOVE: Showing the "add on" signal bay and the auto staff exchanger. Gordon had a 22 lever frame, 19 used, 3 spare. It was abolished as an electric staff station on March 29 1985.

ABOVE: Post 5, up home arrivals with a down "Jet".

ABOVE: R 769 on an up enthusiast's special at Bungaree 1967 (Photo courtesy of Bob Wilson)

ABOVE: A pair of S Class on a very late running up Overland at Bungeree 1964 (Photo courtesy of Bob Wilson)

ABOVE: Whilst firing at Ararat I would often spend "off roster" weekends in Melbourne and catch the 8.30am Down Horsham pass. back to Ararat on Monday morning. After a little nap in the freezing BE, I awoke coming into Bungaree to be greeted to my first ever sight of snow! June 23 1981

ABOVE: The up Vinelander on the auto staff exchanger at Bungaree, 1982

ABOVE:  B77 + B70 depart Warrenheip with a long Ballarat - Geelong goods train on 7 October 1972. Even by this date, double B class workings were fairly rare in the Ballarat district. (photo courtesy Ron Wood)

ABOVE & BELOW: A Melbourne bound "jet" picks up the staff at Warrenheip and swings onto the Bacchus Marsh line, Oct 31 1975. (photo courtesy Bob Wilson)

Compare this photo to the photo BELOW taken 8 years later,  X 53 brings the up Dimboola pass through Warrenheip. April 3 1986. The whole train is painted in the V/Line colour scheme, the station building has been demolished and the train is now running to Melbourne via North Geelong.

ABOVE: When I got my first camera one of the first photographic assignments I set myself was to replicate the famous shot of a B - T - R climbing Warrenheip bank. This shot is from the first roll of slide film through my new camera. I don't know why a dirty old S class was leading the brand new C class, presumeably the C had suffered some sort of failure. 1977

ABOVE: Classic power on Melbourne to Serviceton "Jets" for many years was 2 S class back to back as seen here on an up"Jet" approaching Warrenheip, 1979.

ABOVE: An all wooden consist hauled by a B class prepares to descend Warrenheip bank on its way to Ballarat. 1979

ABOVE: S 315 picks up the electric staff at Warrenheip on the empty return working of the royal train. April 15 1983. (photo courtesy Noel Bamford)

ABOVE: Looking east from the junction, a Melbourne to Adelaide train seen on the left, the line to Geelong curves away to the right. 1978.